Do aliens really exist? This is that one question that has been the matter of debate and controversy for centuries. From Roswell to Suffolk’s Rendlesham Forest, there have been sightings which the so-called UFO hunters have quantified as a proof of extra-terrestrial life.

A survey conducted in 24 countries has come up with findings that suggest that nearly half of the humans believe in alien life and want to make contact. This helps to explain the lasting popularity of the “Star Wars” franchise 40 years after the first movie was screened. Avengers or Avatar for that matter is possibly the highest grossing movies of all times which again leads us to accept the fact that we somehow believe that we are not alone.

Darwin’s theories tell us about the shape alien life will take. A new study from scientists at the University of Oxford found out that All aliens must evolve and that gives us something to look for.  But then there is another question that perplexes me. Does our Mythology (which we tend to believe in more than the living humans around us)  suggest the existence of Extraterrestrial life? Let’s explore! 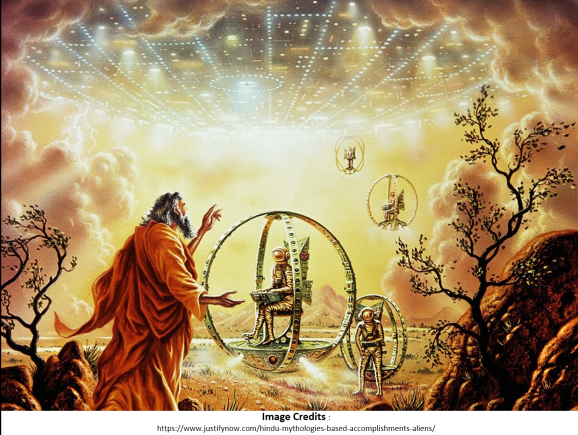 With about 31% population of the world following Christianity, Bible is one of the most sought-after mythologies which has many references to other-worldly beings and flying saucers. In One passage from the books of Infancy and Protevangelion, which is taken from The Lost Books of the Bible describes the same experience many abductees face in our times, where everything stopped and all surrounding people being “switched off.” But then there are another set of people who have a different interpretation of the same and find no reason to accept that the Bible depicts the existence of Alien life. 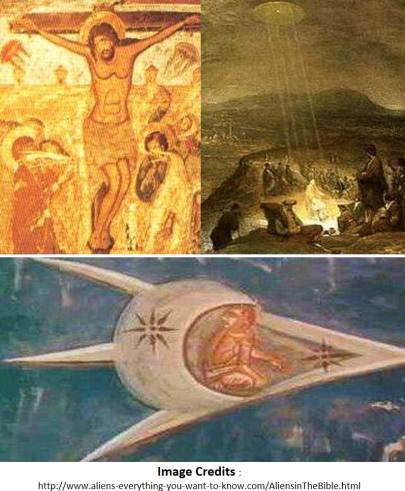 Qur’an Chapter 40 Verse 57
The creation of the heavens and the earth is definitely a greater thing
than a creation of mankind, however, most of mankind know not.

Quran has a similar take on the Alien matter. It gives us a description of multitudes of other earth where God’s commandments are coming one after another as these other earth mature at different times. The word seven is used in following verses in the Quran to denote a very large number more like infinite.

Quran Chapter 65 verse 12
God it is who has created seven heavens, and similar number of earth, The commandments come down among them slowly, that you may know that God is Able to do all things And that God surrounds all things in knowledge

The idea that there is life elsewhere in the universe  was derived from the Prophet Mohammad when he told the Muslims, “When you sit down in the prayer for the Attahiyat and say: “Peace be upon us, and the righteous servants of Allah” you actually send peace on all the righteous people living on the Earth and in the heavens.” which clearly implies that all type of people, good and bad live in the other worlds as they live on our Earth.

Gods in Hindu mythology wore animal masks to conceal their identities with chariots of fire representing UFOs of one kind or another , Gods mating with human women to create the human race in their image , Blue star gods ( The blue blood or royal bloodlines descended directly from the gods) and the mythical battles of Heaven and Earth , From the existence of the likes Of Brahma , Vishnu and Mahesh to Ram & Krishna to Ravana & Kans, all give us references regarding the existence of Ancient Aliens (Living Beings from A different Planet or Realm).

“Krishna, who is known as Govinda is the Supreme Godhead. He has an eternal blissful spiritual body. He is the origin of all. He has no other origin and He is the prime cause of all causes.” (Brahma Samhita, 5:1)

With references like such, it is always beyond the human mind to believe or not to which leaves me with another Question. Do they still Exist? Only time will tell.  Till then let’s go back to Netflix & chill with Star Wars. 😋